For the first time since its initial setup, I decided that it was time to take the plunge and upgrade my hackintosh to Sierra. I’m not gonna lie, it’s something that I’ve been putting off doing for a long time. This is my primary machine, so if something went wrong, I didn’t want to take the risk of being out of action for a while.

It turns out, upgrading from Yosemite to Sierra was a lot easier than I expected. In this post, I’ll write an overview of what I did, tips, and fixes for my specific hardware.

The build is mostly based around hardware on tonymacx86’s buyers guide (I can’t remember the specific month/year). The closer you are to genuine Apple Mac hardware in your build, the less headaches you’re going to have.

The upgrade process was literally as straight forward as described in this post. My previous build was with Chimera/Chameleon bootloader, and migrating to Clover wasn’t as daunting as I anticipated.

The Z97 is a wonderful board to use for a hackintosh, I changed the boot mode to UEFI (not Legacy) and configured the settings below:

This was by far the most frustrating issue. With Yosemite, my motherboard was booting in Legacy mode, and I’d read that things are generally better when booting from the UEFI instead. So I decided to go with that! Unfortunately, there is a quirk with ASRock’s UEFI implementation, which leads to the motherboard not booting at all in UEFI mode. My system returned the dreaded boot0 error.

I was able to boot from USB into Clover, then start the hard drive from there, but that’s no good. After intense Googling, I found that the best method is to install a Linux Live installation to USB, and use Linux to install the necessary kernel modules to the motherboard. Great! Install Linux to USB, run sudo apt-get, and reboot. Sounds easy enough!

I have no idea why, and at the time, I was too frustrated to keep attempting – the USB simply wouldn’t boot into Linux, no matter what distro I tried. It was especially annoying seeing people comment it worked for them. A little disheartened at this point; I decided to search for alternative methods, and after some even more intense Googling, I came across an Insanely Mac post from 2014, where a fantastic specimen of a man had posted an alternative method to add Clover to the UEFI boot menu. The method is:

All we’re doing here is directory browsing so we can locate bootx64.efi, which is fallback program for when the EFI hasn’t been configured with any boot entries. In the next step, (surprise!) we add bootx64.efi to our main hard drive.

It took me a few attempts to find the correct partition on my hard drive, I think it ended up being fs1. But regardless, the solution was very simple, and on reboot, it worked!

rednous, I don’t know who you are. But if i ever meet you, I’m buying you a beer.

As mentioned, this motherboard is very good at natively working within macOS. Main things here: I was advised to set the system definition to iMac 14,2, and to to install Clover to UEFI boot mode (we still have to do the above, because of the buggy UEFI).

Audio didn’t work from get-go, which was expected. After a few attempts, I found that ALC887/888b worked very well. 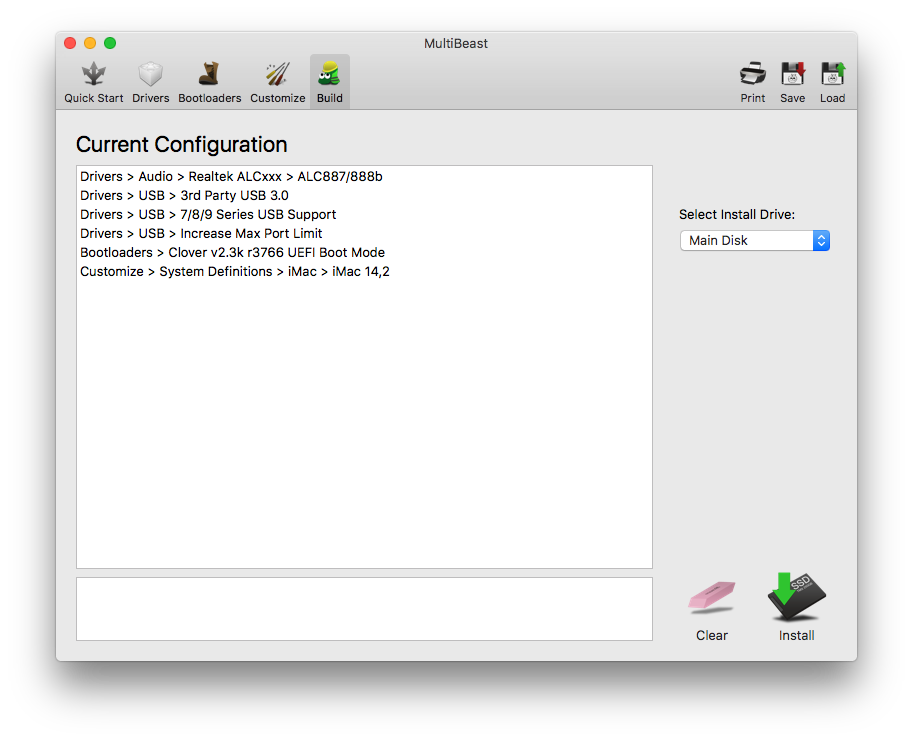 Multibeast settings for my Hackintosh configuration

It’s important as well, to NOT inject nVidia, like I did. If you Inject nVidia, the Graphics Card won’t work. Luckily, because I had two monitors plugged in, the second not getting any signal was an immediate indication of anerror. Also, is that if you go to ‘About This Mac’ – the memory on the Graphics card will show as 0mb.

Incredibly straight forward, navigate to nVidia’s website and download the alternative Graphics Card drivers for Sierra. Install the software, and set your Hack to use nVidia drivers instead of native.

Fix no audio after sleep

A fun little quirk that I accidentally discovered, the audio kept disappearing any time the hackintosh woke up. I recall reading that this is a power management thing. Something about motherboard not sending a signal to the audio driver to power back on (don’t quote me here). Regardless – this is another pretty simple fix:

Important to note here, you do not install this kext to the EFI partition, you install it to the system. I think this is another power management thing (again, don’t quote me. I’m writing all this from memory and a few notes). The S/L/E directory will be a hidden directory, so make sure you’ve enabled hidden folders in Finder.

If you experience an error message when you copy the kext to your Extensions folder, you need to repair system ownership. Open up Terminal and run this command:

Getting iMessage to work

One of the initial reasons for me wanting to upgrade to Sierra – iMessage! Probably the most common issue I read about with hackintosh. Unfortunately, I still haven’t got mine to work. Following An iDiots Guide to iMessage is a brilliant resource for getting to iMessage to work. I followed it, and I have reason to believe all of my settings are correct, but I’m faced with the ‘Contact Apple Support’ message: 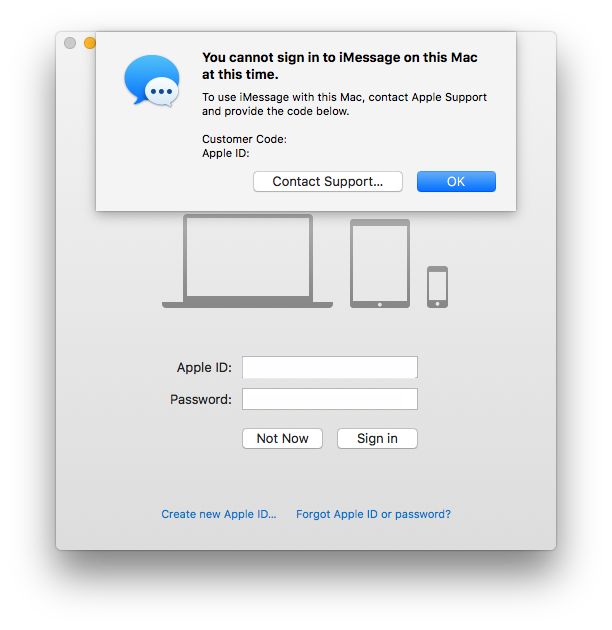 From what I gather, if you get the ‘Contact Apple Support’ error code with iMessage – it means you’re good to go with the system configuration – incorrect serial number combinations tend to return a ‘Verification’ error. Whereas this error message is a security measure by Apple to prevent IDs that appear fraudulent (think Russian, Chinese scammers). It’s easy for those with hackintosh’s to fall under this category, because part of the process of setting up iMessage is rotating your serial numbers to find a genuine match.

The information in this incredibly useful thread gave me a much more clearer understanding of the error message. Though I have read conflicting reports, the information provided does make sense (especially in regards to the next section of this post).

My options here I guess, are to wait it out and see if iMessage works in a few weeks time, or call Apple Support and see if they can remove the blacklist.

After trying to configure iMessage, and learning about the device quota, I had a look on iCloud to see what devices I was signed into. Lo-and-behold, my Yosemite build was still there (defined as a Mac Pro). It was right there next to my Sierra build (defined as iMac 27″). I didn’t have a screenshot of them both there, annoyingly. 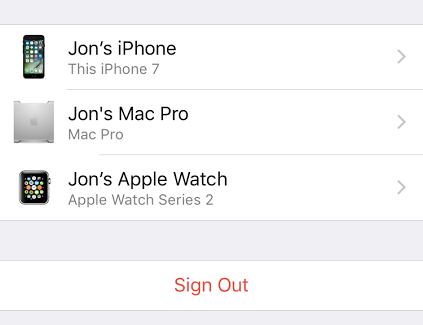 So what was happening here? Despite them physically being the same machine, they’re treated as two separate machines on iCloud because when I did a fresh install from Yosemite to Sierra, I assigned new serial numbers and System Definitions to the machine.

In any normal scenario, I should be able to select the device on my iCloud, and ‘Remove’. This didn’t work. This was the second most irritating issue in this post. No matter what I did, the device would not delete. I tried from my iPhone, I tried from iCloud.com, I tried from appleid.apple.com. Nothing. Would. Work. It just kept reappearing when I reloaded the page.

The solution is a bit of a pain in the ass, but relatively simple

If all is well, your old build will disappear, and your Sierra build will now appear as the only device: 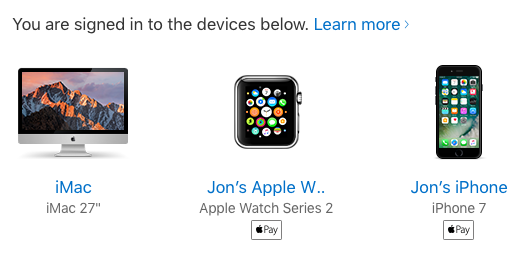 I don’t think that changing my serial number again has helped my chances of getting iMessage to work, but time will tell for that one.

In hindsight, I definitely should have signed out of iCloud on Yosemite before doing a fresh install of Sierra. Next time, I’ll also take note of my current working Serial Number and transfer that one to the next upgrade.

All in all, the process was relatively smooth. I feel a bit silly for worrying that everything would crash and burn. I definitely prefer Clover to Chimera/Chameleon – boot time is much faster, performance is smoother, and overall, the system is much more stable than it previously was. I also have to give a massive, massive thank you to the Hackintosh community over at tonymacx86 and /r/hackintosh. There are some tremendous resources out there, so it’s comforting to know that you’re not stranded when it comes to things breaking on hackintoshes.

Here’s hoping that the next major update to macOS is smooth for the hackintosh.