For the past year or so I’ve been rapidly switching current accounts to reap the rewards of the switch incentives, and in November 2017 I was recommended B Money, who promote themselves as ‘digital banking’ (and were offering a £250 switch reward). It was an instant yes from me because I’ve learned through switching just how awful many banks digital services are.

B Money was a refreshing take on banking: their branding is bold, their app allows you to monitor spending habits in real-time, set-up saving pots in a way that isn’t dreadful – and I do like B Money, but for me the app just didn’t feel ready for prime-time. It would often glitch out & freeze – not very reassuring when it comes to a system that’s handling your money.

Which leads me to Monzo. I actually signed up to the prepaid card BETA when it was Mondo in 2016, but never got around to actually getting a card. Given my frustrations with B Money, I decided that now was the time to make Monzo my main current account.

I requested my card from Monzo and it arrived the next day, which was amazing. Something that I didn’t realise up until writing this was that it also didn’t come with stacks of wasteful promotional and legal booklets. Similarly, your PIN is instantly supplied to you when you log in to the app, Even better! It’s worth noting that the physical card doesn’t have your account number and sort code printed onto the card, these are displayed under the ‘Account’ section of the app, which I think is a nice touch for security.

A lot of users that I’ve spoken to have initially kept their ‘main’ bank account open and transferred money to Monzo as and when they need it – and I do understand the rationale here, as I think that there is some form of uncertainty when it comes to Monzo because it’s a ‘new’ bank that isn’t piggy-backing off of an established bank, but I wanted to go all-in with Monzo to really see if it can stand tall as a primary current account. So how did it fare?

First and foremost – the app itself is gorgeous. The design is modern and sleek without compromising on usability. In an age where your digital presence can make or break you – Monzo has the advantage of being able to build it’s digital infrastructure with modern technology in mind, whereas I feel like more traditional banks have had to hack their often outdated infrastructure to be more up-to-date.

When you spend, you’ll be notified instantly, and though spending notifications aren’t a new thing – it’s nice to keep the paper-trail contained within the native app, rather than cross referencing SMS with bank statements. Also, as somebody who’s guilty of not checking their balance often enough, these notifications will keep a running tab on your daily spend for the day.

One thing that I especially like in regards to the spending notifications is that you’ll get shown when a failed payment occurs, which I discovered accidentally: 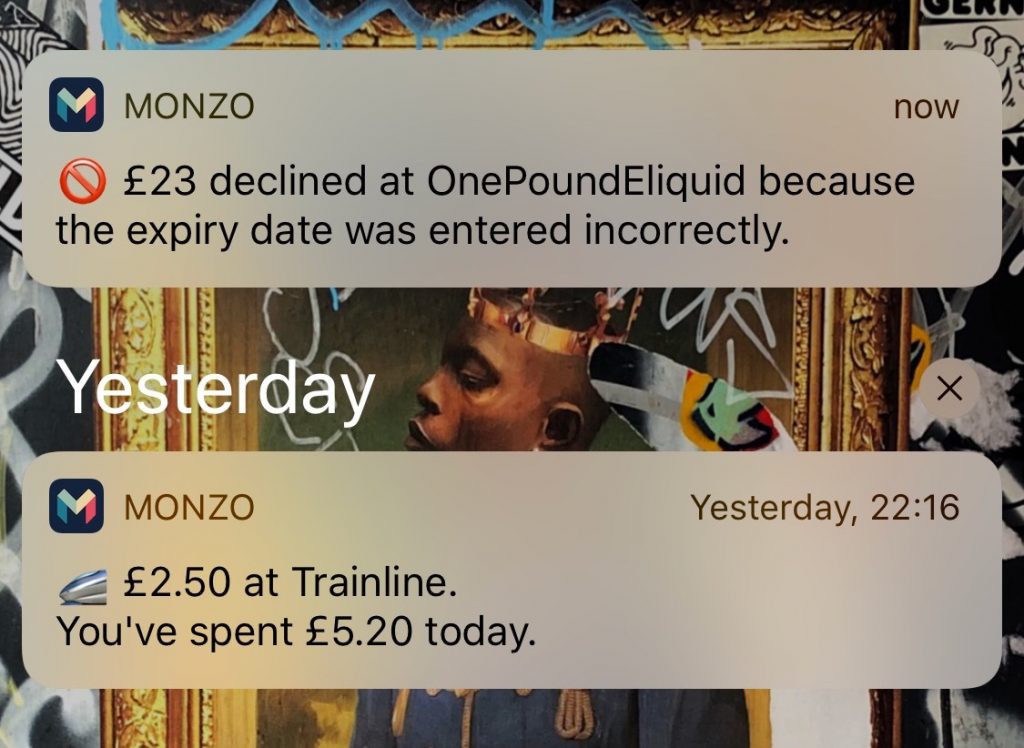 Notification from the Monzo app of a failed transaction.

I hit a bit of a snag when I first used a cashpoint: I was out in London and withdrew £10 – I checked the app and saw 3 transactions: 2 instances of ‘£10 withdrawn’ and 1 instance of ‘£10 deposit’. Not wanting to phone up a call centre and be on hold for 25 minutes for a 5 minute conversation, I hit up the in-app online support. I think I literally wrote this out while I was on the train and received a reply shortly after – this wasn’t necessarily an urgent issue, so it was nice to get on with things and reply at my own pace. 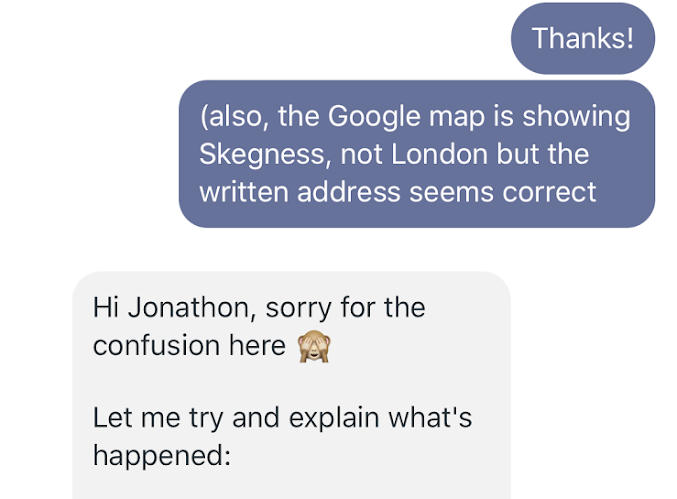 Screenshot of a conversation between me and Monzo support.

It turned out that the issue was with a delay on the merchant finalising the transaction, but as you’d expect, the response from support was clear and simple to understand. If it was an urgent issue, phone support would definitely be more ideal (as of writing this, I’m not sure if Monzo have phone support), but for minor issues like this, online support is great.

The elephant in the room with Monzo is the lack of Apple Pay. Since I first got Apple Pay, I’ve very rarely used my physical card, so I was a bit annoyed that Monzo didn’t have this already, especially when some of their competitors do. I’ve read online that a lot of people consider this a dealbreaker, and I do empathise. Once you go Apple Pay, it really is an inconvenience to have to go into your wallet and get your card out. Realistically, though: this is a first-world problem and for me personally, the rest of the benefits of Monzo outweigh the inconvenience of no Apple Pay.

The features are incredibly useful. The app has a line-graph of your spending above your transactions, which are then broken down into predefined categories like ‘Shopping’, ‘Eating Out’, ‘Bills’ etc. I would personally like to see more specific categories, or even the option for custom categories, too.

You can also set up ‘Saving Pots’ – which is a separate Savings Account, allowing you to have piggy banks for specific saving goals. I love the idea of this – I prefer to split up my savings into different categories. As of right now though, I haven’t set these up because I don’t think that there’s any interest earned on these savings. So for now, my savings are kept in a separate bank account, but I’ll definitely keep an eye on this.

Overall, my first month with Monzo has gone incredibly well. They’ve earned the loyalty of a serial-switcher through their ethics, transparent roadmap and outstanding digital services. In hindsight, I’m not really sure why I was expecting a catastrophic failure, but I suppose that skepticism of a new bank is healthy. I do think that Monzo has an incredibly bright future, I think they’re going to bring some good innovation to an industry that is in desperate need of it. I’m looking forward to seeing where the next 12 months with Monzo goes.