At the end of March, I got an Apple Watch. So, I thought I’d write a little post about my thoughts on using it after one month.

Smartwatches are never something that I thought I’d have. Not because I didn’t necessarily want one, but when it came to spending near £300 on something, I didn’t really want to commit to a device that I wasn’t entirely sure I would find a need for in my life. However, the opportunity presented itself – and now I’m in love.

I was originally going to do this post a few weeks ago, entitled ‘a week with Apple Watch’ – but I didn’t think that 7 days was enough to give perspective on something that would essentially be on my person nearly for every hour that I’m awake. I’m glad that I waited to write this post, because it took me a while to get used to wearing the Apple Watch, and I’ve been discovering more and more uses for it as the days go on.

The first day of having this, I wanted to put a case on it. It looks so, delicate, I was worried about destroying it. However, I’ve found it to be pretty durable. The amount of times I’ve accidentally knocked the watch, or bumped into things while walking and it still looks brand new.

I’m aware it’s waterproof, but I’m still nervous to have it exposed to water. I’ve ran a few times in the rain with it and everything still works, but it’s still taking me a while to trust the waterproofness.

Right off the bat. Most people I’ve spoken to who aren’t sure about the watch have said ‘I suppose it’s great for tracking fitness’, and it is. I don’t consider myself a health-nut, Apple clearly have taken steps to encourage good health with this device. The Watch tracks your calories, time moving, and standing hours in the built-in ‘Activity’ app (those rings are incredibly addictive). This data then imports into the Health app on your phone – which lead me to discover that the Health app exists…

I go running quite a bit, so I have the Series 2, Nike Edition. I can’t tell you how pleased I was to discover that I could leave my phone at home and just use the watch. I genuinely can’t imagine running with a bulky phone strapped to my arm again. It’s also so handy to look down and see my current stats at a glance.

I love the Watch Faces. They’re relatively modular, where you can pick widgets (called ‘Complications’ (?)) that always display on your watch face: 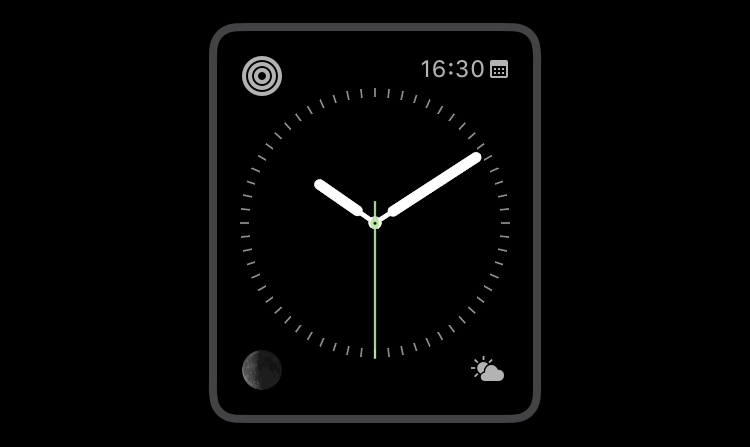 On the top left, I have my Activity Rings; top right: next Calendar event; bottom left: Current Moon Phase; bottom right, current weather. If I tap any of them, it shows me more information. I also like that you can have multiple faces at one. If I were to swipe left, I can switch to a different face. I’ve found that it’s incredibly useful having different faces for different scenarios – one for home, work, when travelling, etc.

I do wish that there were more customisations for the faces. You’re limited to the ones that Apple supply, and while you can customise them all to an extent, if watch faces were opened up to third party developers, I really think we’d see this functionality thrive. But, we all know that visual customisation isn’t open of Apple’s selling points.

Working in the city, I’m on the train or bus every single day. Citymapper has been excellent for bus route tracking and information. Having routes and times at a glance has been indispensable.

While Trainline‘s iPhone app is absolutely gorgeous – their watch app leaves much to be desired. I was hoping to be able to keep my ‘Favourite’ routes on the watch and instantly get service update notifications, platform information etc.. but you have to manually search a route on your phone first before you can do anything on the Watch. Even then, it only tells you where the train currently is geographically. No notifications or anything (such a first-world problem, I know). By the looks of it, the National Rail watch app may do all these things. It’s a shame their iPhone app is ugly!

Uber was a nice addition, too. The app is incredibly basic, in a good way. I can request a journey on my phone, and then the watch will display journey information: driver name, car, rating, current car location etc. It’ll even alert me when the driver is outside. How many times have you been waiting for your Uber to arrive and feel like you constantly need to check the app on your phone? It’s great to be able to get on with things.

I was incredibly disappointed with Google Maps. Which I understand, why would Google make a great map app for Apple Watch when they want people to buy an Android Wear device? I think I had high expectations because Google sometimes have a habit of making their iPhone apps better than their Android counterparts. That being said, the Google Maps app simply displayed turn-by-turn directions in a list on your watch, and then they completely pulled the app. Oh, okay.

I’d never even activated Siri on my phone before I got the watch. My previous phone was a Nexus 5X, and I knew that going from Google’s assistant to Siri would be disappointing, and I was right. Siri is still absolutely useless. Somehow, Siri is even more chained down on the watch than she is on the phone. Siri on the watch is only in hands-free mode when the screen is face-up and the screen is on, which is great for the battery and my tinfoil hat. It’s just a shame that whenever I ask her to do anything, she either responds in text-format (yup), or tells me that she ‘can’t do that’.

Still, it’s a great tool for voice reminders, which I do actually use all the time.

I could go on, there are way more things the watch does that I haven’t mentioned, tried yet, or maybe even discovered. While the watch does show it’s limitations at points, it’s a great bridging device between my phone and my real-life. It’s nice to not have to feel I have to look down on my screen for information and I can just get on with things.

While I can recognise its flaws, I can also appreciate that it’s a pretty damn good assistant to my life, and I do love it.